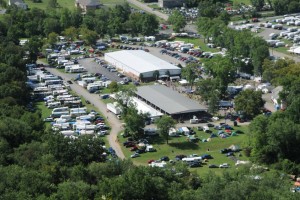 It was a grand day when the Cumberland Fair opened in its new $150,000, 100-acre home on Tuesday, October 9, 1924. The large tract of land along the Potomac River, known as Fairgo, was transformed into a beautiful fairground beneath the towering cliffs of Knobley Mountain. Seven stables, sixteen open-air barns, two exhibit halls and a caretaker’s residence were built on the fairgrounds. A large grandstand, a clubhouse, a jockey house, a pavilion at the finish line, and a paddock were erected around the half-mile oval track. The new fairgrounds also boasted a skeet shooting area and tennis courts.

The Cumberland Fairgrounds immediately became a favorite gathering place for the community, especially during the horse races. Races were restricted to a two week meet held in conjunction with the Cumberland Fair. Cumberland’s racing dates were sold to other tracks in 1962. Beginning in 1967 stock car and USAC Sprint car races took up where the horses left off with drivers such as Mario Andretti eating up the track. Today, every Saturday from April – October, spectators thrill to the revved up engines of stock car racing at the fairgrounds.

Since the fairgrounds opened, every July or August has been fair month in Allegany County. A variety of exhibition halls, barns, and stables were built throughout the fairgrounds to house the architectural displays. Farm animals of all kinds have been an integral part of the fair. Generations of farm queens, blue ribbons, animal auctions, and children riding rides play an important role in the history of the Allegany County Fairgrounds.